20 Common & Weird Side Effects of Pregnancy

If you are pregnant or are planning on being pregnant, you have probably heard all about the common pregnancy side effects to expect. But, what about the things they don’t tell you about? Read on to learn all about the effects of pregnancy on the body other moms may have avoided talking about, such as extra saliva, skin pigmentation, and restless leg syndrome.

More than 50% of women are expected to develop acne during pregnancy. Acne breakouts are caused by the increase of natural oil, or sebum, produced by the skin due to hormonal changes during the first and second trimesters.

During pregnancy, the growth of your baby causes additional pressure on the bladder, which may lead to leakage. This is also referred to as pregnancy incontinence, and can be caused by pressure, hormones, medical conditions, and UTIs.

Hormonal changes during pregnancy affect even your oral health. Nearly 40% of women develop gingivitis while pregnant. Progesterone is the culprit in developing pregnancy gingivitis, making your gums more susceptible to the damage of plaque.

In preparation of the arrival of your baby, your nipples may protrude and your areolas may darken due to an increase in estrogen and progesterone. While not proven, some say this is to create a clear target for the baby while breastfeeding. 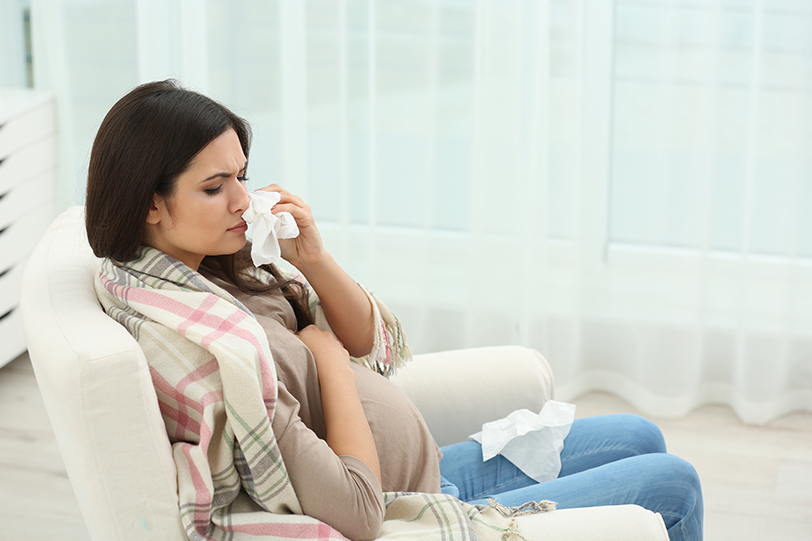 Just under 40% of women suffer from rhinitis during pregnancy. Symptoms of pregnancy rhinitis include congestion, sneezing, and a runny nose. Typically, these symptoms appear in the first or third trimester and go away 2 weeks after birth.

An increase in progesterone again impacts pregnancy side effects. Progesterone relaxes muscles, which affects the intestines and slows down the digestion process, resulting in constipation. Nearly 75% of pregnant women experience this side effect.

Studies have shown that 60% to 70% of women experience a change in their feet during pregnancy, with feet growing 2mm to 10mm in length. The arch of the foot loses height and rigidity during pregnancy and causes the foot to elongate.

Another less-than-glamorous effects of pregnancy on the body is an increase in gas. The first trimester introduces an increase in progesterone, which relaxes the intestines, and estrogen, which causes the body to retain gas and cause discomfort.

Constipation, as mentioned earlier, and hemorrhoids are two pregnancy side effects that unfortunately go hand-in-hand. The strain from constipation can form hemorrhoids, and pressure from your baby also puts a strain on the large veins behind your uterus. 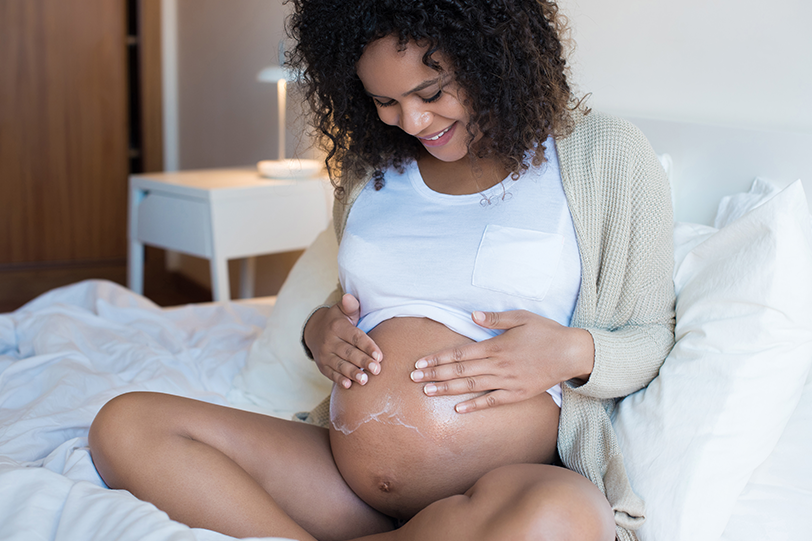 Mild itching is common in pregnancy due to an increased blood supply to the skin. As your pregnancy progresses, the skin of your abdomen stretches and becomes itchier. Some women also experience cholestasis of pregnancy, or intense itching without a rash.

In the second and third trimesters of pregnancy, leg cramps are a common side effect of pregnancy. Leg cramps can be caused by a number of reasons, but the most likely culprits are calcium deficiency and the strain on your muscles, blood vessels, and nerves from carrying extra weight.

Another one of the pregnancy side effects pertaining to legs is restless leg syndrome. RLS causes you to want to move your legs from itchy, burning, pulling, or overall uncomfortable feelings. A lack of folic acid or iron or an increase in estrogen are the main triggers of RLS during pregnancy.

Ptyalism gravidarum, or the excess of saliva, can make the first trimester morning sickness more unpleasant to expecting mothers. While unpleasant, experts hypothesize the increased saliva production is to protect the mouth and throat from the effects of stomach acid.

Are you suddenly more aware of all the smells around, good and bad? While scientific research is minimal, anecdotes from expecting mothers dating back 100s of years mention a heightened sensitivity to smell – most likely caused by an increase in estrogen levels.

Nearly 90% of pregnant women will notice a change in skin pigmentation known as melasma or chloasma. This pigmentation may be light or may be more noticeable in splotches around the upper lip, nose, cheekbones, and forehead often referred to as the “mask of pregnancy.”

A skin tag is a small piece of skin that hangs from the body that typically appear on the neck, underarms, under the breasts, and in the groin due to friction. Pregnancy brings weight gain, which increases the opportunity for friction. Luckily, they are harmless and easily removed.

One of the early side effects of pregnancy is sore breasts. The increase of estrogen and progesterone in the first trimester cause tenderness and increased sensitivity. Your breasts, and nipples especially, may feel extremely sore to the touch due to increased blood flow.

Feeling hotter than usual? During the first and third trimesters, you may expect periods of hot flashes and increased sweat production due to the increase in metabolism, blood flow, and hormones in the body. Extra sweat is caused by your body attempting to cool down.

You will notice some changes in vaginal discharge throughout your pregnancy. Leukorrhea is the normal vaginal discharge during pregnancy and is thin, white, milky, and mild smelling. It is important to keep track of any changes that may indicate infection or another condition.

The effects of pregnancy on the body can lead to a lot of expected and unexpected conditions. Even though not every mother talks about these less-than-glamorous pregnancy side effects, they are very common. Reach out to other mothers or your doctor for support if need be, as they’ll understand and help make your pregnancy as comfortable as possible.

Join us at our next Fertility Seminar